A couple of weeks ago I was thrilled to discover cucumbers at 50 cents apiece. At that price, I just had to make pickles. Although that might not sound like a great deal to those of you living in the lower 48, here in Alaska, that’s a real bargain. Jon loves pickles, especially my dill pickles. So much in fact, that when I asked him to get some out to share with company during a recent party he defensively asked, “How many jars do we have left?”

This most recent batch of pickles was my first where I had the benefit of my food processor for slicing all of those cucumbers. The food processor made quick, consistent work of all of those cucumber slices. No wonder I ended up with 21 jars of pickles, in 3 different varieties, no less! Had I been slicing the cucumbers by hand, I daresay I’d have given up sooner. As for the smaller bits of slices that are inevitable when using a food processor, I saved those and made a lovely cucumber and tomato salad with a white balsamic vinaigrette. It turned out to be a win-win.

There are lots of great things about pickles, not the least of which is the way they taste, of course, but if you are a first-time canner, they can set you up for success as few other projects can. The vinegar makes them so acidic that you can safely and easily seal then in about 5 minutes in boiling water – you don’t even have to own a special water bath canner to do it. You can use a stock pot with a make-shift rack in the bottom if you’re willing to be patient and do a few jars at a time. Start counting your 5 minutes as soon as the water returns to a boil. Be careful not to let them boil too long, because at that point you start cooking your pickles. Cucumbers don’t do well when cooked, and you can end up with mushy pickles instead of the crisp ones you were hoping for.

If attempting canning on your own worries you, phone a friend. Find someone else who does some canning and ask them if you can join them the next time they’re going to be canning something. An extra hand in the kitchen, especially when you have a lot of food to put up, is almost always welcome. Besides, those of us who enjoy doing things like canning and bread making and crocheting – the things our grandmothers taught us – really do enjoy the opportunity to pass them on to others. A nice glass of wine and the promise of half of the pickles as a take home gift might get your friend to come to your kitchen for a quick canning lesson. You never know.

If you can’t wait and you’re too nervous to try canning your first batch of pickles, that’s okay. Just make a smaller batch (try cutting the recipe in half) and do refrigerator pickles instead. As long as you keep them in the refrigerator and your family finishes them up within several weeks, you don’t have to worry about them going bad because you didn’t seal the jars. Friends and family will also be happy to help you polish them off within the time allotted. Just make sure that you give the pickles a minimum of 48 to 72 hours sitting in the brine (in the refrigerator, of course,) before you pop them open and give them a try. It takes at least that long for the cucumbers to soak up enough of the flavors to taste like pickles. If you can stand to let them sit for 4 or 5 days, you won’t be sorry.

I’ve posted my 2 of my favorite pickle recipes – Dill Pickles and Caraway Seed Pickles – for you to try. I encourage you to experiment with them, as I have, and create something that is uniquely your own. 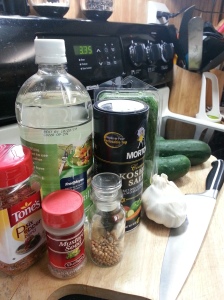 The more fresh Dill, the better!

3 pounds of cucumber slices, about 1/8″ thick

Combine the vinegar, salt and sugar in a medium saucepan and heat over medium heat, stirring constantly, until the sugar and salt are completely dissolved. Remove from the heat and add the water, coriander, garlic, mustard seed and red pepper. Stir to combine and allow to stand until it reaches room temperature, stirring occasionally to blend ingredients well.

Meanwhile, stuff cucumber slices loosely into jars, (about 6 pints should do well) to about 3/4 inch from the top.

When the brine has cooled, add the dill and stir well to dampen the dill thoroughly and discourage it from floating as much. Using a canning funnel and a ladle, ladle the brine into the jars to within 1/4″ of the top. Do your best to evenly divide the spices and dill.

Wipe the jar rims, place hot lids and rings on the jars and process in a water bath for 5 minutes. The pickles will also keep in the refrigerator for several weeks.

3 pounds of cucumbers, sliced into 1/8″ slices

Bring all ingredients, except the cucumbers, to a boil over medium heat, stirring constantly until sugar and salt are dissolved. Remove from heat and let cool for 20 minutes.

When the brine has cooled, remove the cinnamon stick. Pour the liquid over the cucumbers through a canning funnel, taking care to evenly divide the spices between the jars, using a spoon or ladle if necessary. Wipe the jar rims, place hot lids and rings on the jars and process in a water bath for 5 minutes. The pickles will also keep in the refrigerator for several weeks.

I laughed when I selected the option for a "Follow Button" and the nearly microscopic button below appeared. I'm sure a larger one costs money.

Line up your bifocals (if you need them, as I do,) and select the button below if you would like to follow our blog.

We hope to see you here again soon!