As a young man, my dad worked in a butcher shop. I can remember, as a girl, being awed by his knife skills – for that matter, I still am. He was always so dexterous and quick and confident. And watching him as he sharpened knives with a steel was something between thrilling and frightening. All I could imagine as a gawky, klutzy teen was the epic fail that would ensue if I were to attempt it.

Dad gave me a steel as a gift several years ago, though the knives that I had at the time were hardly worthy of such a lovely and thoughtful gift. I’ve learned to use it, though my efforts are slow and methodical compared to my dad, of course. I’d also like to think that I’ve developed a bit of sense with regard to the knives I’ve purchased over the years. There are some things, knives among them, where you really do get what you pay for.

Not so very long ago – and here, we’re talking months – I decided that it was time to do something about my abysmal knife skills. I did an on-line search and discovered something really wonderful. The Cuisinart Culinary School with chef Jonathan Collins. I found these little gems, out of Cuisinart Canada, on YouTube. The very first lesson of Episode 1 was precisely what I was looking for. Knife Skills. Not that most chefs don’t make it look easy, but Chef Collins actually makes you believe that you can do it, and so you can. After trying out the techniques a couple of times, I found myself holding knives differently and doing a better, more consistent job. It was amazing. For several weeks, my husband laughingly used my new-found skills as an excuse to let me do the prep work. “You’re the one with the new knife skills…,” but eventually his own desire to improve in the kitchen won out and he watched (and benefited from) the episode himself.

The classes cover a myriad of things that are designed to improve your abilities and confidence in the kitchen. I would absolutely recommend them. The one caveat that I must add, however – or perhaps I should label it a warning – is that they show you several of the top-of-the-line Cuisinart kitchen gadgets (in action, of course) that you may really want to own, some of which have fairly high-end price tags. If you read my French Bread post, then you already know that I succumbed to the 14-cup Elite Collection Food Processor. I’m still struggling to convince myself I don’t need the Griddler Elite Grill. Maybe in our next home…

But I digress…I’m supposed to be talking about knives. (We can chat more about the cooking classes at a later date.) No kitchen is complete without a few select knives. Which knives you select as your “go-to” favorites will very much depend upon the kind of cooking you like to do and what you spend the majority of your prep time on. For most people, a chef’s knife is a downright necessity. We consider it a “must have.” (Kitchen Must-Have’s – another topic to be developed…) You can purchase a decent chef’s knife, if you know where to shop, and you’re patient enough to wait for a deal, for under $20. But not much under $20. You want something with a sturdy handle that’s comfortable to hold and a blade that will hold its edge, but tolerate sharpening when needed. Chef’s knives are used for all sorts of things, but they’re a powerhouse for cutting, slicing and chopping vegetables.

I’m very fond of my Santoku knives, in fact, I have 2 different sizes, but you really can survive without them. A paring knife, however, is another “must-have.” You need to have something small enough that you can cut an item that you’re holding in your hand – without cutting your hand. In the July, 2015 issue of Food & Wine Magazine there is an absolutely fabulous article to celebrate Jacques Pépin, whom many of you may know from his cooking shows and cook books. In their “Knife Skills” section they interviewed chef Jonah Miller from Huertas in New York City. About Chef Pépin he said “These days we tend to use big, flashy Japanese chef’s knives, but Mr. Pépin often uses a paring knife, which lets him cut ingredients with more control, in his hands.” That being said, once your knife skills improve, and you get more comfortable using larger knives, you may find that you’ll use the paring knife less often than you probably do now.

A utility knife. I find the name amusing. Almost as if they couldn’t really pick something to describe what it did, because it can do a little bit of everything. Makes me think of the old saying “Jack of All Trades, Master of None.” This is the realm of the utility knife. Yet every kitchen really ought to have one. Ours is a knife that Jon picked up in a Safeway in Washington DC in 1985. He was working at the Smithsonian and had an apartment near the Van Ness Metro station. Having just relocated from the other side of the country, he had very little money, so he had to settle for a single knife. He sharpens it on a stone which perches proudly in our kitchen window, and this lovely old knife continues to do sterling service. 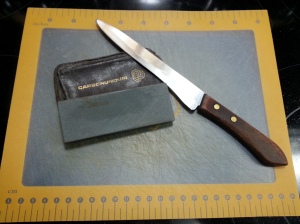 A bread knife. The serrated edge allows you to cut through the crust without tearing or squashing the bread. You want slices of bread when you’re finished, not deformed chunks. I suppose if you were really desperate, you could use a steak knife…(shudder.)

You’ll need a decent pair of kitchen shears and a good peeler. There are several different types, some that are designed to peel specific vegetables – like an asparagus peeler, for instance. Who knew. But once you’ve used one, there’s no going back. This is an area where the things you eat and how you prefer to prepare them will again dictate the best choices for you. As to what type of peeler to own, I suggest you buy whatever is most comfortable for you to hold and does the best job on what you’re trying to peel. Few homes can have just one.

And a bit about cutting surfaces. Wood and plastic surfaces are subject to damage, and will therefore, hold onto flavors, odors and bacteria unless you make the effort to clean them properly. Bamboo is harder, doesn’t mar as readily and has antibacterial properties. I’m a bit of a germophobe, and obsessive about chicken and pork, so I use a glass cutting board for those. Glass is harder on knife edges, however, so I wouldn’t want to use one for everything. I tend to use flexible cutting mats most of the time these days. They’re versatile, come in a variety of sizes and turn any surface into a cutting surface with no risk of damaging counters or tabletops. These easy to clean sheets are lightweight and flexible so that you can pick them up and hold them over the bowl or pan and whisk the items right into your dish – much easier than using your knife blade or a bench scrape to transfer smaller pieces.

There are a few things that I left out because my mother raised me that if I had nothing nice to say I shouldn’t say anything at all. Others were left out because, while they might be nice to have, they’re much less essential. My goal in improving my knife skills was not to join the ranks on MasterChef, but rather to reach the point where I could prepare meals quickly and efficiently in my own kitchen. Having the necessary tools to complete those tasks is critical.

I laughed when I selected the option for a "Follow Button" and the nearly microscopic button below appeared. I'm sure a larger one costs money.

Line up your bifocals (if you need them, as I do,) and select the button below if you would like to follow our blog.

We hope to see you here again soon!